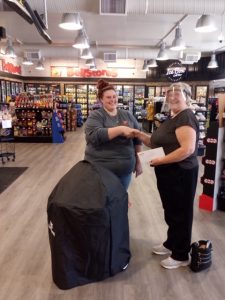 DALTON  When Karol Niehaus, who lives just outside of Dalton, received an email notification that she had won a charcoal grill through BellStores, she was going to dismiss the email as spam — but then she decided to give it a second look.

As a Bell Buddy Rewards member through the local gas station and convenience store, Niehaus automatically had been entered a chance to win a prize.

“I thought at first it was a hoax,” she said. “I’ve never won anything like this before.”

Niehaus, who is the Meals on Wheels site coordinator at Dalton Presbyterian Church, picked up the grill Wednesday at the BellStores in Dalton. She said she will be gifting the grill to a family member.

“I’m giving it to my sister,” Niehaus said. “She doesn’t have a grill.”