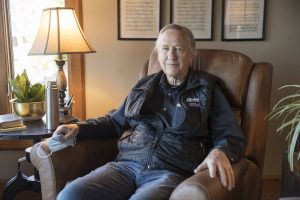 Peter Dunn takes a break from recording the audio version of his book at his Sugar Creek Township house on the farm located not far from the company he founded in Dalton. (PHOTOS BY RANDY FATH | FOR THE DGKN) 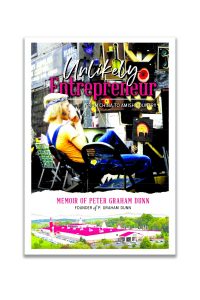 Cover of Peter Dunn’s memoirs, “Unlikely Entrepreneur,” to be released May 1. (PHOTO PROVIDED)

SUGAR CREEK TWP.  The profile of a young man with long sideburns and denim overalls, leaning back in a chair, graces the cover of Peter Dunn’s recently printed memoirs.

One could presume from the 1974 photo that the bandanna, rolled up and wrapped securely around Dunn’s head, serves both the practical purpose of keeping his hair out of his eyes, and as a fashion statement at a crafts fair at South Street Seaport Museum in New York City.

A world away from China where he was born, and Three Hills, Alberta, Canada, where Dunn grew up in a group home with other “missionary kids,” New York City also is a far cry from the 74-year-old’s peaceful home in Ohio’s Amish Mennonite community, where in 1976 he founded the company that is his namesake – P. Graham Dunn, a multimillion-dollar manufacturing and retail enterprise.

The far corners of Dunn’s life are explored in his 270-page memoir, detailing his travels around the world, his work, his family, and the many people who have touched his life and his faith.

Dunn said he hopes readers will be encouraged and inspired by the book, to be printed this week and set to be released in paperback May 1.

Copies of “Unlikely Entrepreneur” will be available to purchase April 10 at Faith View Bookstore’s ninth annual Spring Music Celebration. Doors open at 3:30 p.m. at the Mt. Hope Event Center, 8076 State Route 241, Millersburg. In addition to an opportunity to meet Dunn and buy his book, the event features six musical groups and food vendors. Cost for the event is $15; children 13 and younger are free.

The self-published book also can be pre-ordered at pgrahamdunn.com, and any of the 16,000 retailers that carry P. Graham Dunn’s products have the opportunity to stock it. The book is $11.99, and 50 cents from every book sold will be donated to Bread of Life School in Haiti. The book also will be available at www.amazon. com, and Dunn said other book-signing events likely will be scheduled.

Dunn said the company he owned and founded has never sold a book before, so he doesn’t know how far it will reach, or how it will sell. But that’s nothing new. His entire life so far, Dunn has become accustomed to carving out his own path. 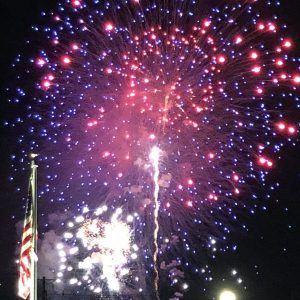