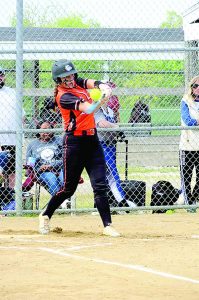 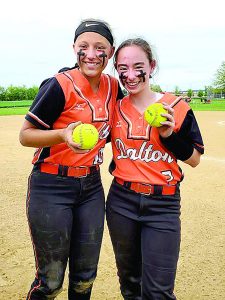 Josslyn Reynolds and Savannah Wenger with their homerun balls May 15.

Dalton High School’s varsity softball team easily cruised past Canton Central Catholic in the first round of the Division IV, Richfield sectional. The Lady Dawgs were knocked out of the tournament in the sectional final game by Hillsdale. Dalton finished up the season with games against Rittman.

No. 5 seed Dalton faced No. 10 Central Catholic in the sectional semifinal May 10. The Lady Dawgs won 11-3. The Crusaders started off with a three-run lead in the top of the first. Dalton added two runs in the bottom of the inning. Elle Mooney, who had two triples in the game, led off

Dalton’s turn at-bat in the first inning with her first three-bag hit of the game. She was later driven home by Abbi Snyder. Joey Reynolds singled and was sent in by Lexi Vazquez. Dalton drove in two more runs in the third inning to take the lead. Vazquez doubled in a run in the fifth inning. Callie Jones walked to lead off the sixth inning. Mooney came up next and smashed a two-run homer for her first home run of the season. Vazquez hit a two-RBI double later in the inning. The Lady Dawgs scored two more runs to make it a six-run inning.
Cadence Casto was the winning pitcher. She gave up three earned runs on four hits, gave up four walks and struck out two hitters.

Dalton lost to No. 2 Hillsdale, 11-1, in the sectional final May 12. The Falcons took an early four-run lead in the second inning. Hillsdale scored one run in the third inning and four runs in the fourth. Dalton’s lone run came in the top of sixth when Tess Denning sent home Reynolds on a double. Hillsdale finished with two runs in the bottom of the sixth. Casto took the loss. In 3 2/3 innings of work, she gave up nine runs on eight hits, while walking one and striking out one batter.

To finish up the regular season, Dalton played Rittman at home May 12. The Lady Dawgs shut out the Indians 18-0. Mooney led off the game with taking a base after being hit by a pitch. She moved to second base after a sacrifice hit by Snyder. Reynolds drove in Mooney with a single. Denning doubled home Reynolds. Vazquez hit a two-run homer to finish out the four-run inning. The Lady Dawgs put up three runs in the second inning. Vazquez hit her second two-run bomb of the game in Dalton’s 11-run fourth inning.
Ava Fivecoat no-hit the Indians and took the win. She issued one walk and fanned five hitters.

Dalton’s final game of the season was a 12-3 road win against Rittman May 15. The Lady Dawgs collected three runs in the first inning. Vazquez put two runs on the board when she homered in the second inning. Rittman scored its first run in the bottom of the second. Dalton added one run in the third and two runs in the fourth inning. The Indians totaled two runs in the bottom of the fourth. The Lady Dawgs plated two runs in both the fifth and sixth innings. Casto earned the win after pitching a complete game, giving up three runs on four hits, walking two and collecting four strikeouts.

Dalton’s head coach Pam Spencer said this season was special to her.

“I was happy to have a season and coach my players and watch them grow as players throughout the season,” she said. “This season meant so much to my players, and since we didn’t have a season last year, my fabulous five seniors got a Senior Event and were able to play a full season.”
Looking ahead to next season, Spencer has goals for the mindset of the program.

“As the softball program at Dalton, we are going to continue the shift of the culture of Dalton softball to ‘we are Dalton softball,’ not just Dalton,” she said. “We are growing the program from the ground up and building consistency through the program.”

Dalton’s JV team defeated Northwestern 14-4 in the opening round of tournament action May 14. A nine-run fourth inning propelled the Lady Dawgs to victory. Dalton collected 19 hits in the win. Savannah Wenger tripled and Sydney Geiser, Chloe Simmons, A.J. Lehman, Lauren Falb and Josslyn Reynolds all recorded doubles. Ava Nussbaum and Lehman both had three RBI each. Dalton committed no errors in the game. Falb finished with eight K’s during her pitching performance.

The second round of tournament play was a pitchers dual between our Dalton JV and Division 1 Madison. The score remained 0-0 until the 7th inning. Lauren Falb pitched a full game striking out 4 and walking 4. The Lady Bulldogs came into the bottom of the 7th down 4 runs. They scored 2 runs and had enough runners on base to tie, but were not able to complete their rally. Geiser went 3 for 3 at the plate. Matea Martinez and Skylar McConnell each had an RBI for the Lady Dawgs. Dalton played next for third place against Buckeye.

The JV Lady Bulldogs held off a 7th inning comeback by Buckeye to claim third place in the Northwestern Tournament. The Bulldog offense collected 18 hits on the night including two homeruns over the left center fence by Reynolds and Wenger. Sydney Geiser, Skylar McConnell, Ava Nussbaum, Chloe Simmons, Matea Martinez, Wenger, and Reynolds all had multiple hits on the night. Ava Fivecoat was the winning pitcher with eight strikeouts. The JV Bulldogs finished the season with an overall record of 21 – 5 and 11-1 in the league making them the WCAL Champs. 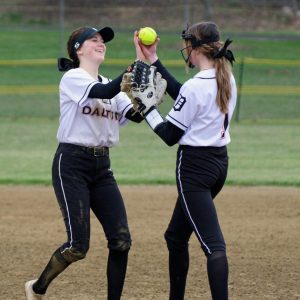