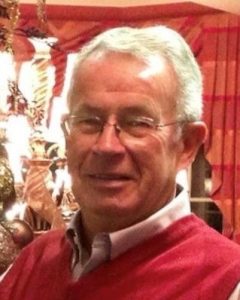 John P. Tucker, 76, of Marshallville passed away peacefully on Thursday morning, December 30, 2021, at the Apostolic Christian Home in Rittman, following a period of declining health.
John was born on January 25, 1945, in Terre Haute, Indiana.  He graduated from Smithville High School in 1963, and Bowling Green State University in 1967.
John married Cheryl (nee: Newman) on November 11, 1967, and they were married for over 54 years.
After graduation from Bowling Green, John served in the Army as a Ranger including service in Germany and Vietnam.  He was honorably discharged from the Army after suffering an injury in Vietnam and finished his career at Fort Knox Kentucky.  John was a Captain upon leaving the Army, and received numerous medals for his service.
John came back to Marshallville to join his mother and father in the family business, Marshallville Packing, and later Tucker Packing as President.  John and his brother Frank, and son Jim, worked tirelessly to grow the business over the years serving thousands of loyal customers and providing for many employees and their families.
John cared deeply about Marshallville and the Green Local Schools and led many initiatives over the years for both, including serving on the Green Local School Board and as its President, St. Michael’s United Church of Christ, St. Michael’s Cemetery Board, Marshallville Lions Club, Marshallville Historical Society, Marshallville Volunteer Fire Department, and American Legion Post 718.
In addition, John served in leadership roles in many other community and Board positions, including the Ohio Association of Meat Processors Board of Directors and as its President for many years, where he was able to implement many initiatives to improve the processing and sale of meat products in the State of Ohio.
John enjoyed traveling, building and creating things (especially anything with rocks), spending time in Florida in the winter and at the lake in the summer, and fishing including the infamous fishing trips to Canada with friends.  Above all, John enjoyed spending time with his family and particularly all of his grandchildren, including many sporting events, concerts, graduations and times at the lake.
John was preceded in death by his parents, Frank and Jeanette.  He is survived by his wife, Cheryl; children John (Holly), Jim (Sarah), Jeff (Jana), Jenny (Jason), and Julie (Matt); nine grandchildren Kayla, Jason, Paige, Laura, Alex, Chantz, Bradley, Jordan and Jaxon; brother Frank (Sherrie) and nephews Matt (Michelle) and Pastor Andrew (Michelle).
The family would like to thank Dr. Bonezzi, and the caregivers at the Wooster Community Hospital, and at the Apostolic Christian Home, for their amazing care.
A private service will be held for family.  The family asks that in lieu of flowers that donations be made to the Marshallville CIC at 7 North Main St., Marshallville, Ohio 44645, Marshallville Lions Club 15714 Fulton Rd. Marshallville, Ohio, 44645, or St. Michaels United Church of Christ at P.O. Box 198 Marshallville, Ohio, 44645.
Auble Funeral Home in Orrville is handling the arrangements. Online registry and expressions of condolence may be made at www.aublefuneralhome.com.
Posted in Obituaries