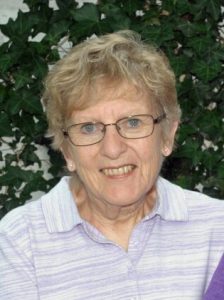 The world lost a beloved wife, mother and grandmother, Carolyn Fitzwater, on December 29, 2021.  Carolyn battled breast cancer for over 12 long years.  She suffered often from it but seldom complained of any pains or discomfort to anyone.  Even though this discomfort was a constant reminder of what the cancer was doing to this wonderful lady, she never refused to express kindness to all and especially offer the best hugs to her grandkids whenever they would come to her.

Carolyn left from her home on earth with her husband Bob and sister-in-law Beth at her side when God took her by the hand and led her to once again be with her infant son, Cory, along with her mother and father for the most fantastic reunion one could ever imagine.
Carolyn was born to Martha Jane and Cletus Gerber at their home in June, 1944 in rural Dalton where she had been a near life-long resident.  Carolyn attended Dalton Local Schools from kindergarten through high school graduation in 1962.  After graduation, she attended, and worked for, Bluffton College, graduating in 1971.  While attending Bluffton, she met Bob, a 1973 graduate of Bluffton and they were married in August, 1972.  This year would have been their 50th anniversary.
Their first child, Cory Robert, was born prematurely in June, 1973 and preceded his mother to Heaven in August of that same year.  Their second child, Dustin Scott, was born in October, 1980 and currently lives in Eugene, Oregon with his wife Alieh (Zamany), whom he married in September, 2017.  They have an 18 month old son, Kian Reza.  Carolyn and Bob’s third child, Amber Denee, was born in November, 1981 and lives in Kidron with her husband Ryan Doty, whom she married in June, 2007.  They have a daughter, Kenna Grace, born in May, 2009 and their second daughter, Ava Mae, born in May, 2012.  All three of Carolyn and Bob’s grandchildren were the love of Carolyn’s life and she absolutely cherished every second she was able to spend with each of them!  Carolyn will thoroughly enjoy watching them from Above as they grow from the fantastic young people they are now to outstanding adults.
Carolyn’s teaching certificate allowed her to begin her teaching career at Carey High School in western Ohio where she taught business classes for two years before coming to Dalton Local High School and teaching for seven more years. In 1981, Carolyn retired from teaching to become a full-time mother to her two children.
Carolyn was a life-long member of Salem Mennonite Church near Kidron.  During her time at Salem, Carolyn was active in youth groups, sang for many years in the adult choir and also participated in Salem’s WIM.  Carolyn served as the church treasurer for 30 years and by virtue of that position, was also a member of church leadership during those years.
Carolyn’s many hobbies included quilting, cross-stitching, scrapbooking, card making, going to garage sales and attending quilting shop-hops whenever they were on the calendar, with Bob often at her side.
Along with her husband Bob, children Dustin and Amber and their families, Carolyn is survived by her brothers Gene (Nickie), Randy (Dar) and Ted (Beth) and seven nieces and nephews as well as many aunts, uncles and lots of cousins.  Carolyn is also survived by many members of Bob’s family who were a constant source of encouragement and prayer.
Friends are invited to say their final goodbyes to Carolyn on January 14 and 15, 2022 in the Fellowship Hall of Salem Mennonite Church in Kidron.  Calling hours are between 5:00 to 8:00 p.m. at Salem on Friday and again on Saturday between 12:00 and 2:00 p.m. with the funeral service beginning immediately thereafter in the church sanctuary.   A brief family graveside service will follow at the Salem Cemetery.
In lieu of flowers, memorial gifts can be given to the college scholarship fund that is set up for Carolyn’s three grandchildren in care of Robert Fitzwater at the Farmers National Bank.

Out of respect for the entire Fitzwater family and everyone else in attendance during the calling hours and the services, masks are being required and are to be worn by everyone.