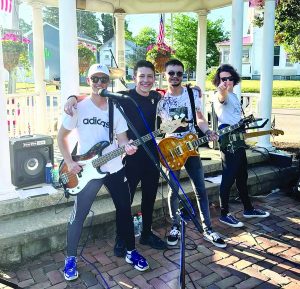 The Three Baers perform at 7 p.m. Aug. 11 at the gazebo in Marshallville.

MARSHALLVILLE  Marshallville is the place to be this month.

The last of Marshallville’s concert series at the gazebo is 7 p.m. Aug. 11 and this performance is sure to be a crowd pleaser.

As reported in a previous story, Mayor Martha Martin began the concerts three summers ago to use the village’s gazebo for more than the annual Memorial Day service. The concerts are mostly town funded and some private citizens give to the concert fund, Martin said. She tries to have about half a dozen concerts each summer.

“It’s a nice way to foster the community,” she said.

The grand finale is The Three Baers.

“In a nutshell, we rock!” wrote Jaren Baer, in an emailed response to The DGKN. The 20-year-old is the drummer for the group known for playing “covers that everyone knows and loves” as well as “energetic, skillful originals.”

David and Jaren are locals to Marshallville, Asher lives in Orrville, and Luke lives in Wooster.

The band plays every style of rock music from the 1950s to today.

“We like to see just how much we can accomplish with only four members, and our rock-and-roll spirit is sure to give people a good time,” Jaren said.

The group plays locally for the most part and traveled to Indiana to shoot a music video “Goodbye Forever,” available on YouTube.

“When we’re not performing, we work on perfecting our act and writing more songs,” he said. “We recently recorded demo tracks of seven original songs, and we will be uploading them to Spotify soon!” Find “The Three Baers” on Facebook and Instagram.

Later this month, the 42nd annual Marshallville Historical Days includes a classic car show 12-4 p.m. Aug. 27, with the Blacksmith Shop open. The parade is at 11 a.m. Aug. 27 with lineup at 9:30 a.m. Antique tractor pull is 1 p.m., beer garden runs until midnight and touch a truck also is Aug. 27 at the park. The Little Miss and Master contest 6 p.m. Aug. 26 for children 12 and younger.  For more information, Find 42nd annual Marshallville Historical Days event on Facebook.