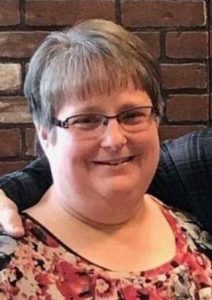 Darla R. Shellhorn, 43, of Dalton, passed away on Tuesday, March 31, 2020 at LifeCare Hospice in Wooster after a courageous fight.

She was born in Peoria, IL on October 7, 1976 to Marvin and Rachel (Kennell) Hostetler of Washburn, IL and married William H. Shellhorn on June 3, 2006 and he survives.
Darla treasured time with her family and friends.  She was a member of the Fairlawn Mennonite Church in Apple Creek and had been employed by Everence Credit Union in Kidron.
In addition to her parents and husband, she is survived by maternal grandparents Ben and Edith Kennell; a sister, Donna (Brian) Miller; brothers, Nelson (Jill) Hostetler, Nathan (Jennifer) Hostetler, Norman (Kristen) Hostetler and Nick Hostetler; in-laws, Jerry Shellhorn of Wooster, Peggy (Lloyd) Shellhorn of Wooster; brother-in-law, Scott Shellhorn of Shreve; sister-in-law, Judy (Jake) Schlabach of Fredericksburg; 19 nieces and nephews; a great niece; numerous aunt’s, uncle’s, cousins and beloved friends.
Due to the current health concerns, family graveside services will be held at the Fairlawn Mennonite Church Cemetery and a service to celebrate her life will be held at a later date.  Spidell Funeral Home in Mount Eaton is assisting the family with arrangements.
Spidell – Mount Eaton
330-359-5252
www.spidellfuneralhome.com
Posted in Obituaries