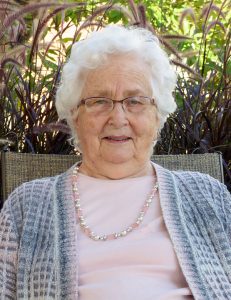 She was born on February 18, 1932 to Eli and Hulda Nussbaum of Kidron, and married Marcus (Mike) Neuenschwander on March 6, 1952.  He preceded her in death on September 2, 1995.
Also preceding her in death were her parents, all seven of her siblings, daughter-in-law Debbie (Conrad) Neuenschwander, and Grandson Robbie (Gary) Neuenschwander.
Surviving are nine children, Juanita (Dave) Ross of Kidron, Conrad of Kidron, Phyllis (Steven) Mullins of Dalton, Julia (Henry) Beun of Kidron, Don (Kaye) of Dalton, Randall (Sharon) of Kidron, Karen (Doug) Jiskoot of Larchwood, IA, Gary (Lynette) of Wooster and Jyl (Bruce) Basinger of Hot Springs, AR.  She had 29 grandchildren, 56 great-grandchildren and 2 great-great-grandchildren.
Esther’s first love was the Lord Jesus.  She faithfully followed him all her life, joining the Sonnenberg Mennonite Church as a young person, and remained an active member there until death.
Her family was precious to her, and she to them.  She fully accepted all the life-mates her children chose, and, from the start, made them feel like a part of her large jovial tribe.
She will always be remembered for her mischievous sense of humor – bordering on downright orneriness (thanks to the Nussbaum side) – and her ability to handle whatever life handed her, with quiet strength and dignity.
Mom would never want to be thought of as a perfect mother, mother-in-law, or grandmother, but she was perfect for us, and we will greatly miss her.
The funeral service will be at 11:00 A.M. Wednesday, March 17, at the Sonnenberg Mennonite Church with Pastor Mel Hathaway officiating.  A private burial will take place prior to the service for immediate family.
There will be no public viewing, and visitors who attend the service are asked to wear masks, practice social distancing, and adhere to posted signs and spacing limitations.
For those who would like to make a donation in her memory, she was particularly fond of the Sonnenberg Mennonite Church and Central Christian School (Kidron).  Other good choices are OrrVilla and Ohio’s Hospice LifeCare – who provided wonderful care during the past year and in the final days.
Spidell Funeral Home of Mt. Eaton, Ohio is handling the arrangements.
Spidell
330-359-5252
www.spidellfuneral.com
Posted in Obituaries