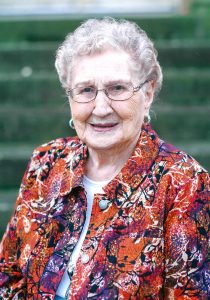 Betty J. (Chelf) Todd, 95, of Wooster, passed away on Wednesday, March 31, 2021 at West View Healthy Living.
She was born in Mount Eaton on November 12, 1925 to the late Doyle and Gwendolyn (Richeson) Minser and married Jack T. Chelf on August 4, 1946.  He died September 3, 1992.  On February 25, 1995,she married Glenn W. Todd.  He died on May 24, 2013.
She worked as director of nursing for 20 years which included twelve years at Wooster Community Hospital, six years in Florida and two years in Wisconsin before retirement.
She is survived by children, Kathy (Rodney) Lemon of Fredericksburg and Mike (Diane) Chelf of LaCrosse, WI; daughter-in-law, Patty Chelf of Wooster; 7 grandchildren; 18 great grandchildren; a sister, Sandy Shaffer of Azle, TX.
In addition to her parents and husbands, she was preceded in death by a son, Tom Chelf; and a brother-in-law, Lewis Shaffer.

Family services will be held with burial in West Lawn Cemetery in Mount Eaton.  Spidell Funeral Home in Mount Eaton is handling the arrangements.