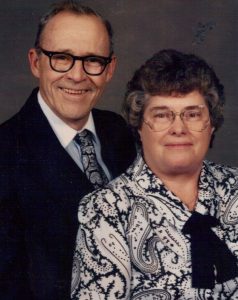 Orrville–The bells rang for Wanda Wagner Sunday morning, May 30, 2021 at Orrvilla Maple Terrace after a short period of declining health.
Ruth Wanda Rose was born Sunday morning, May 25, 1930 in Doylestown to Amerion and Laura (Weaver) Rose. She graduated from Apple Creek High School in 1948.  On June 25, 1949, she married Bill Wagner.  They spent nearly 68 years together before his passing on May 31, 2017. She lived in Orrville since 1949 and recently made her home in her last years at Orrvilla Maple Terrace, where she was “resident ambassador” and took her Sunday night Euchre seriously.
She is survived by 3 children: Kaylyn, Michael (Dawn), and Larry (Lynne), all of Orrville. 6 Grandchildren: Allison Wagner of Waverly, OH, Andy Wagner of Charlotte, North Carolina, Angie (Joel) Rogers of Dover, OH, Suzanne Wagner of Wooster, and Libby and Caris Wagner both of Orrville, two Great-Grandchildren: Bella and Colton Reeder, brother and sister-in-law Richard (Nancy) Wagner of Columbus, a host of nieces, nephews, and friends, and her bonus kids and grandkids in the Beachy family.
She was a member of St. Paul’s Lutheran Church in Smithville and had attended Orrville’s basketball and volleyball games since her son Mike started to play in 1968.
Her family was her greatest joy and she took pride in every single one of them. The name Ruth means friend, and a friend she was to many.
Private graveside services will be held, and a celebration of life will announced at a later date. Graveside service will be live streamed at facebook.com/AubleFuneralHome at 10:00 am on Wednesday, June 2nd.
In lieu of flowers, donations can be made to Orrvilla Retirement Community 333 E. Sassafras St., Orrville,OH 44667 or any Hospice facility.
Auble Funeral Home in Orrville is handling the arrangements. Online registry and expressions of condolence may be made at www.aublefuneralhome.com
Posted in Obituaries