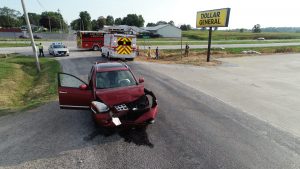 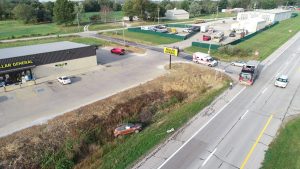 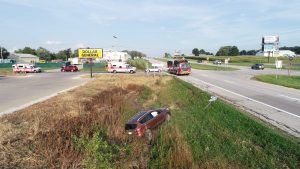 A vehicle landed in the ditch after being struck by another vehicle early evening Tuesday at U.S. 30 and Eckard Road. The two drivers and passengers were treated at the scene by East Wayne Fire District.

Dalton Police handled the first incident which involved a semitrailer striking a utility pole at 12:11 p.m. The truck was turning onto U.S. 30 off of Lincoln View from the gas station, according to Dalton Police Chief Ryan Pearson.

Later, Pearson said a man reported to police that when the semitrailer struck the pole it caused a light fixture from the pole to fall and damage a vehicle that was being transported by a vehicle transport company.

Some residents, the schools and businesses reported their electricity flickering and losing power for a short period of time.

Lincoln View was closed briefly to make sure motorists avoided the power line draped across the road.

The second crash that Dalton Police handled involved two vehicles at 2:40 p.m. Both were traveling west along U.S. 30 and the at-fault vehicle failed to maintain an assured and clear distance ahead and struck the other vehicle, which was stopped at the traffic light at U.S. 30 and state Route 94.

The passing lane was shut down for a short period of time while the scene was cleared and one person was taken to an area hospital with what appeared to be nonlife-threatening injuries, Pearson said.

Ohio Highway Patrol handled the third crash in the area Tuesday. Lt. Todd Roberts with the Ohio Highway Patrol said at about 5:30 p.m. two vehicles were involved in a crash and a driver and passenger from each were treated at the scene for minor injuries by East Wayne Fire District.

A vehicle traveling west on U.S. 30 was struck by a vehicle traveling north along Eckard Road. The vehicle heading north failed to yield for traffic west bound and struck the westbound vehicle in the side pushing it off into the ditch.