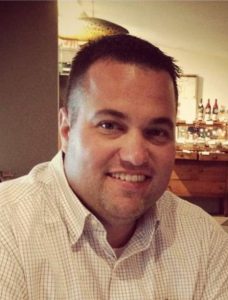 Orrville — Brooks Allen Curtis, age 41, of Orrville, died Tuesday, October 12, 2021, at Aultman Hospital in Canton, following a courageous battle against Covid-19.
Brooks was born on January 10, 1980, in Orrville, to Dennis L. and Sally L. (Rider) Curtis, graduated from Orrville High School in 1998 where he wrestled and played baseball and was the quarterback on his football team. He received a Bachelor’s Degree in Business from Muskingum University in 2003 where he played football.  He married Tamara Mary Wilson on November 10, 2007 in Orrville.
He worked as a technical ink and plate account manager for International Paper out of the home office in Marysville since 2014.  He grew his territory from the ground up building rock-solid relationships that resulted in unprecedented sales growth through the years.  In 2013 he fulfilled a dream and started Greenstar pallet with his business partner and had locations in Westfield NY, Charlotte NC, and Chattanooga TN.
Brooks was a member of Christ United Church of Christ and was a Board member of the Orrville Area Boys and Girls Club. He enjoyed coaching football at all levels and coached for both Orrville high school and Hoover high school in North Canton.  Some of his favorite things included watching college football, camping, boating, and spending time with his family.  He was an avid Yankees fan, Denver Broncos fan since the days of John Elway, and Ohio State fan.  He loved vacationing in Hilton Head with family which he had been doing all his life.  He was completely devoted to his sons and family and was always willing to help out with anything that was asked of him.
Surviving are his wife, Tammi; two sons, Gunner Lee and Maverick Wesley Curtis of the home; parents, Denny and Sally Curtis of Orrville; two sisters, Stacey (Jason) Haley and Nicole (Brian) Lacy, both of Orrville; brother, John Curtis of Wooster; nieces and nephews, Cooper and Averi Haley, Owen and Katie Lacy, and Grant, Lucy and Lilly Curtis; and in-laws, Jeff and Kathy Wilson of Holmesville, Brian (Amber) Wilson and their kids Hayden, Hadley, and Haisley of Wooster.
He was preceded in death by grandparents Ira and Lucille Rider and Raymond and Betty Curtis.
Friends may call on Monday, October 18, 2021, at Calvary Assembly of God, 2061 Wadsworth Road, Orrville, from 4:00 pm to 7:00 pm.
Services will be held at 12:00 pm on Tuesday, at Calvary Assembly of God, with Pastor Chuck Davis officiating. Burial will take place at Crown Hill Cemetery in Orrville.
In lieu of flowers, memorials may be made to the Orrville Area Boys & Girls Club, 820 N Ella St., Orrville, OH 44667, oabgc.org.
Auble Funeral Home in Orrville is handling the arrangements. Online registry and expressions of condolence may be made at www.aublefuneralhome.com.
Posted in Obituaries