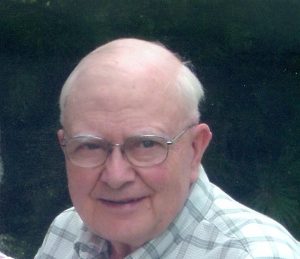 David was born on January 1, 1928, near Columbiana, OH on the family farm. He was the son of Caleb and Ada (Horst) Yoder. He attended a one room school and later attended North Lima High School. He grew up working on the family farm and helped his father with the retail farm produce route in Youngstown. He was united in marriage to Frances M. Amstutz on October, 2 1954 at Martins Mennonite Church.

He learned the carpentry trade and enjoyed working with wood the rest of his life. During his life he built much of his own furniture and later with the help of his sons, built his own house which he lived in for over 30 years. Later in life and during retirement years, he built many wood items and donated most of them to benefit auctions. He also enjoyed gardening and volunteering at MCC Connections.

He was a member of Martins Mennonite Church and served as a trustee for a period of time.

He was preceded in death by his parents; his wife Frances of 54 years; sister-in-law, Dorothy Yoder, and infant brother, Robert.

Services will be held at Martins Mennonite Church 14027 Church Rd, Orrville, OH 44667, on Thursday, February 27, 2020 at 11 am with Pastors Randy Murray and Shawn Hilliard officiating. Burial will take place at the church cemetery.

Friends may call at the church on Wednesday February 26, 2020 from 6 to 8 pm and one hour prior to the service on Thursday.

Auble Funeral Home in Orrville is assisting the family with arrangements. Online registry and expressions of condolence may be made at the funeral home web site at www.aublefuneralhome.com.