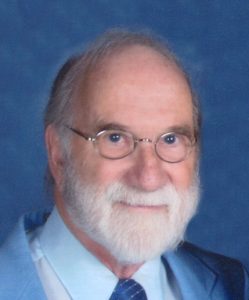 Orrville, OH — Edward P. Beers, was born on October 31, 1941, in Lylville Village R.D. Utahville, now Coalport, Pennsylvania, the fifth son of Cloyd V. and Edna P.(Sackett) Beers.  The family moved to his great grandfather Valentine Beers farm when he was two years old, where he was raised working on an active dairy farm surrounded by all sorts of animals.
He graduated with honors from B.C.I. (PA) High School in 1960 and attended Nyack College for one semester in Nyack, NY after high school.  He then returned to Coalport and was employed by Powell Coal Company, Technical and Welding Department in Blandburg, PA in 1961.  He began an electrical apprenticeship with Adams Electric in Altoona, PA in 1962.  In 1965, he began E.P. Beers Electrical Contractor. In 1965, he was employed by Richard L. Kern Electrical Contractor in Clearfield, PA.  During these years he also operated his great grandfather’s farm where he built his own home and lived with his wife Julia and three sons.
Called by God to preach the Gospel of Jesus Christ, he moved his family to Taccoa, GA, where he entered Toccoa Falls College in 1970.  He graduated with honors in 1974 with a B.S. Degree in Theology.  During his years at Taccoa Falls College, he worked as a maintenance electrician on the campus and as a custodian for the Federal Housing Authority.  He also pastored a non-denomination group at Kyte Street, Taccoa during 1973 and 1974.  He moved his family to Spring Creek, PA where he became the pastor of Cobbs Corner Church and Ty Excelsior Full Gospel Church.  He completed his preparation studies and was ordained in the Gospel Ministry by the Christian and Missionary Alliance (CMA) on Sep 22, 1976.  While pastoring there, he merged the Cobbs Corner and Ty Excelsior Churches into the Midway CMA and built a new church building on the Titusville Spring Creek Road.  He then moved his family to New Castle, PA and pastored the Peoples CMA for six years.
In 1983, Ed and his three sons began a building construction company, Beers Builders, which he operated until 2013.  In 1985, he began pastoring the Calvary Assembly of God church in Bessemer, PA, serving there until 1999.  For 14 years he wore two hats as a builder of people and buildings.  In 2003, he married Cynthia Cressman and had the privilege of helping her raise two daughters, Stephanie age 15 and Molly age 12, bringing them to a relationship with Jesus Christ.
He began portraying General Robert E. Lee, conducting living history programs in public schools, colleges, churches, clubs, and other organizations.  In 2012, after losing two wives, Ed met Patti Dolges while conducting a living history program in Wooster, OH.  They were married July 12, 2014 and God had saved the best love until last.  Ed left PA and joined with his bride in Orrville, OH after renovating her house and adding an addition. He is survived by her.
After 25 years of active pastoral ministry, Ed continued preaching ministry by supplying for many different churches and denominations.  After studying with the Seventh Day Adventists in 2006, he preached in many of their churches and conducted seminars.  During the 1970’s, 80’s,  and 90’s, Ed conducted religious services at the Golden Hills Nursing Home in New Castle, PA for 27 years.  He also conducted services in many other nursing homes.  Ed was an active member of the Sons of Confederate Veterans, Camp 2021, Boardman, OH, a lifetime member of the NRA, and a member of the Orrville CMA.  He is resting in the arms of Jesus, awaiting the resurrection.
Preceding him in death were Ed’s mother and father, brothers, James and Dr. Kenneth Beers, and his younger sister, Shirley Jasper, and his first wife, Julia.
He leaves behind his brothers, Raymond (Linda) of Leesburg, FL and Harry of Utahville, PA, three sons, Edward A. (Cindy) Beers of New Castle, PA, Mark A. (Joye Dell) Beers of New Castle, PA, and Richard L. (Kim) Beers of Coalport, PA; four grandsons, Andrew (Lisa) Beers of Cranberry Township, PA, Benjamin Beers and Michael (Missy) Beers, both of Mercer, PA, and Steven (Kaitlyn) Beers of Franklin, PA; four granddaughters, Kristine Beers, Rebecca Beers, and Jamie (James) Plyler, all of New Castle, PA, and Kayla Beers of Irobona, PA; seven great grandchildren, Tyler Hutton of Irobona, PA, Michael Beers Jr. and Jacob Beers, both of Mercer, PA, Aidan Beers of Franklin, PA, Jonathan Beers of Cranberry Twp, PA, and J.J. and Alina Plyler of New Castle, PA; four step-daughters, Stephanie (Brandon) Cornelius of Elwood City, PA, Molly Kelsie of Kent, OH, Larissa (Andrew) Allen of Columbus, OH, and Andrea (Geoff) Kolchin of Aspers, PA; and six step-grandchildren, Gage and Carson Cornelius of Elwood City, Daniel, Maia, Liam Niedererr of Aspers, PA, and A.J. Allen of Columbus, OH.
A private graveside will be available to view by live stream at facebook.com/aublefuneralhome at 2:00 PM on Wednesday, December 2, 2020, with Pastor Mark Buchwalter officiating.  A memorial service will be held at a later date.
Memorial contributions may be made to Sons of Confederate Veterans, PO Box 59, Columbia, TN 38402, svc.org.
Auble Funeral Home in Orrville is handling the arrangements. Online registry and expressions of condolence may be made at www.aublefuneralhome.com.
Posted in Obituaries