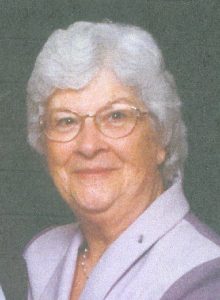 Dorcas was born July 7, 1934, in Holmes County, Ohio, to the late Walter and Pauline (Miller) Kandel.  She married J. Robert “Bob” Lemon on June 26, 1954, at Martins Mennonite Church in Orrville.  Bob survives.  He found the promise of Proverbs 18:22 to be true; “He who finds a wife, finds a good thing, and obtains favor from the Lord.”

Dorcas graduated from Orrville High School in 1952 and was a homemaker and pastor’s wife, and worked as a secretary for the Boyer Funeral Home in Piketon, Ohio, for many years.  She enjoyed being a homemaker and loved her family with cooking, sewing, gardening, managing the home, and later making quilts and babysitting her grandkids.  She was a ministry partner and wonderful support to Bob during their thirty years serving the Owl Creek Mennonite Church, Beaver/Lucasville, Ohio, as pastor’s family.

Dorcas was a member of Martins Mennonite Church and later attended Kidron Mennonite Church after moving back to Wayne County.  Dorcas volunteered at MCC.  Her faith in the Lord Jesus shaped her life.  God’s work in her life was seen as a quiet, confident assurance and she had a steady godly influence on many.

She was preceded in death by a sister, Judy Wise, brothers-in-law, Chuck Smith and Ron Smith.

Private services with Pastor Rodney Bapst as officiant will be held for the immediate family, and burial will take place at Martin’s Mennonite Cemetery in Orrville.