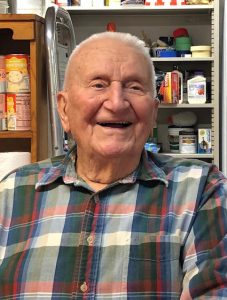 Ferdinand “Fred” Wudy, 91, of Kidron, was born May 30, 1930 in Miljanovac in the former Yugoslavia.. He survived World War II in Europe, living there until 1950 when he came to the United States, settling in North Olmstead, Ohio.
He met his wife, Lois (nee Bruck) at the Hofbrau Haus in Cleveland. They were married on October 18, 1952. They have two children, Linda (Ted) Elder and John (Michele) Wudy and are the grandparents of 11 and great-grandparents of 3.
Fred was proud to have served in the United States Army from 1953-1955, achieving the rank of Corporal in the 11th Airborne. He proudly became a United States citizen in 1953. After his service time ended, he owned a Standard Oil dealership until 1972, when he began working for the Euclid City Schools. He retired in 1998 and moved to Kidron where he planted an amazing garden.
Fred was a member of Canton Baptist Temple in Canton, Ohio and was active in his Sunday School class. Fred went to be with our Lord and Savior Jesus Christ on Tuesday August 31. He is survived by his wife of 68 years, Lois, and his many offspring.

Funeral services will be held on Friday at 10:00 am at the Canton Baptist Temple, 515 Whipple Avenue, NW, Canton.  Burial will be in the Ohio Western Reserve National Cemetery in Rittman.  Friends may call on Thursday from 6-8 PM at the Spidell Funeral Home in Mount Eaton.