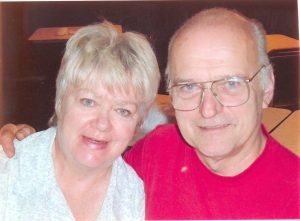 Ashland — Richard D. Matty Sr., age 80, of Marshallville, passed away Thursday, January 13, 2022, at The Good Shepherd Skilled Nursing and Rehabilitation Campus in Ashland, following a period of declining health.
Richard was born on January 10, 1942, in Akron, Ohio, to the late Chester and Ester (Failor) Matty and married Saundra Carpenter on November 29, 1963, in Doylestown. Saundra died on March 10, 2012.
He graduated from Smithville High School in 1960, went on to attend Case Western Reserve University, and worked as a Electrical Engineer for Republic Steel.
Richard was a big Cleveland sports fan of the Browns, the Cavaliers, and the Indians. He was known as “Marshallville Matty” with his “Fine 409” at the drag strip.
Surviving are four children, Linda (Jim) Bates, and Tracey (Jim) Swinehart both of Smithville, Richard Matty, Jr. of Rittman, Michael (Lori) Matty of Ashland; eight grandchildren, Joey (Beth) Matty of Smithville, Richard “Richie” (Brittney) Matty III of Marshallville, Tyler (Whitney) Bates of Loudonville, Kenny (Amber) Larabee of Akron, Alex Bates of Wooster, Michael “Mikey” Matty, Jr. of Sheffield Lake, Zoe (Owen) Pullar and Scott Swinehart both of Smithville; 4 great grandchildren; brother, Robert (Linda) Matty of Hudson; and sister, Diane (Paul) Staab of Carmel, IN.
In addition to his wife, he was preceded in death by his sister, Ruth Matty.
Private burial will be at St. Michael’s Cemetery in Marshallville.
The family would like to thank the staff at The Good Shepherd Nursing Home for caring for Richard and treating him like family.
In lieu of flowers memorials may be made to Good Shepherd Nursing Home, 622 Center St, Ashland, OH 44805.
Auble Funeral Home in Orrville is handling the arrangements. Online registry and expressions of condolence may be made at www.aublefuneralhome.com.
Posted in Obituaries